Harry is London, UK, European and World Poetry Slam Champion, with two 5 Star Edinburgh fringe shows under his belt. He has performed internationally including in Chicago, New York, Munich, and Warsaw. Harry is currently studying for a Maths degree in term time and doing the festival circuit in summer. He is living the dream.

Paper People is one of three poems from Harry included in Rhyming Thunder – The Alternative Book Of Young Poets. 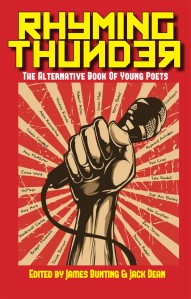