The Most Important Poetry Book in 45 Years? #BangSaidTheGun 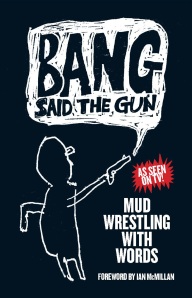 THIS IS THE MOST IMPORTANT POETRY BOOK IN 45 YEARS.

“The night is a rollercoaster of emotion. It’s loud and raucous, as political as it’s trivial as serious as it’s funny,” says Martin Galton, “it’s like a rabid poetry mongrel and we have captured the best of that and put it in the book.”

The official launch night is Thursday 12th September 2013 at The Roebuck, Great Dover Street, London SE1 at 8pm. You can still order using the buttons below of course:

“Bang Said The Gun is a vortex of energy and enthusiasm”

“Like all the best things in life, Bang Said The Gun is done with commitment, belief and passion, and Mud Wrestling With Words is written proof.”

“The death of poetry.”

One thought on “The Most Important Poetry Book in 45 Years? #BangSaidTheGun”