Sometimes when I see a great poet I get very involved in what they are saying, my fingers play with my clothes, my hair stands on end and my upper lip gets a weird twitch as if I’m poised ready to laugh and/or cry and really haven’t decided on either.

She was one of the first poets recommended to me when I was starting out; I watched all the YouTube videos of her poems and was an hour early to her set at Boomtown in 2012. Needless to say, I am huge fan and am thrilled about the release of BOYS and to have the opportunity to have a chat about the book with Sally herself. 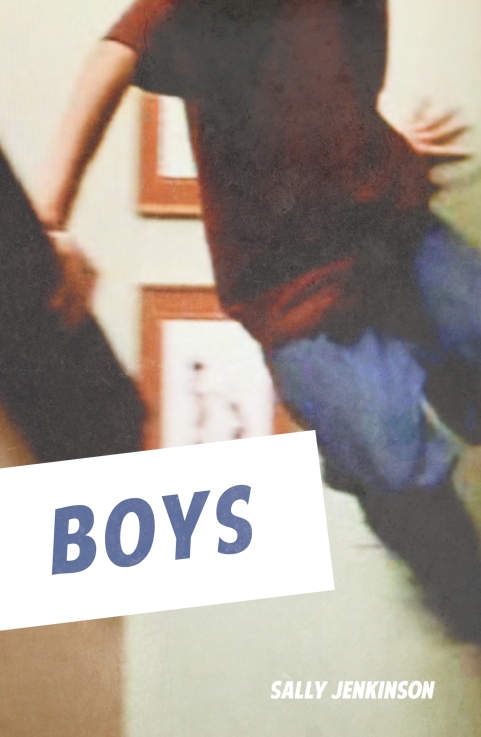 Hi Sally! You’re in Iceland at the moment – how is it?

Hello! I actually just got home, after a month of being Writer in Residence at a culture centre called Skriðuklaustur, in rural East Iceland. It was the home of Icelandic writer Gunnar Gunnarsson in the 30s and 40s, but it is also the site of the only fully excavated medieval monastery in Iceland, so it was a really interesting place!

The centre was in the Fljótsdalur valley – it’s really really beautiful, hundreds of waterfalls. I went for long clambering walks every day, and got absolutely loads of new writing done without the pressure of everyday distractions like work, laundry, bills to pay, stuff like that. Not to mention that when the centre closed at 5pm, and everybody went home, I was alone for miles around, apart from the sheep and geese! So it really lent itself to working creatively and I was pushing myself to try new things in my work. I did get very lonely though. I’m not always a people person really, but I realised that I sort of like being near people, even if I don’t want to talk to them! If anyone is interested I kept a little blog while I was on the residency. You can look at it here.

‘Boys’ is your second collection with Burning Eye, how does it differ from the first?

Well I think and hope that it is better writing! (My first collection) Sweat-borne Secrets was published in 2012, so I’ve had four years to push myself to improve as a poet, but also to read and fall in love with lots of other people’s poetry! It is reading other poets that really spurs me on to keep writing, and trying to improve and open up in my writing.

I wanted the poems in Boys to be quite plain and honest, because of the themes that I’m working with, but also for them to be the writing that I could produce – I like to be hard on myself!

Your writing is shattering and heartbreaking in this collection, and it feels therapeutic going through back to windows of your childhood up until the present. Were these poems written and collected over a long period?

They were all written in the last two years really, but with some of the poems, I have been kind of mulling over a sense of them for a long time. To be completely honest, the pieces in there that are about my late brother, I’ve been carrying them around for a decade, or the idea of them at least, but I wasn’t ready to write them fully until fairly recently. And that’s ok. I knew I would write them one day but it didn’t feel like the right time until now. Grief is difficult to explore, you have to wait until you’re ready.

And the other side of the collection, that is more to do with boys in the outside world; the roles that are foisted on to boys, and the way behave and treat women and are taught to treat women – I wanted to look at those things in a poetic rather than overtly political way, although of course they are political and socio-political in nature. I don’t think I felt confident enough to express my take on those kinds of subjects until recently. Being blunt and vocal and perhaps inflammatory when it comes to discussing or writing about sexual politics is scary. People can be very mean and condescending if they want to quiet you, or don’t like what you’re saying.

Anyway, I hope that the poems are welcoming, and that readers will feel or get a sense of the real experience of the things in the poems, rather than just reading them objectively and being like ‘hmmmm, interesting’. I hope that makes sense!

BOYS is split into two sections, ‘Before’ and ‘After’, did you always have this structure in mind for the book?

Not from the outset – it’s only a very short collection so I know it seems kind of over the top to break it into two parts! But I hope it will feel right to people who read the poems. I needed to put a little pause in there for lots of reasons; before and after bereavement, before and after leaving home, before and after adolescence, before and after sex. I’ll leave it up to the reader, I’m not in charge of those poems anymore!

How do you manage your processes on writing and putting a collection together?

Yeah, it was quite hard finding time to write. I moved to Brighton last year and the cost of living is much higher here, so I just have to work a lot more. I saved up and took a couple of weeks off work in order to have a stretch of free time to finish the writing, and my boyfriend did all the cooking and housework paying for things while I just stared at and scribbled on hundreds of bits of paper that I’d stuck all over the flat!

Then my good friend Jamie Harrison gave up loads of his time to edit it with me. He is a copy editor by trade, but also he is a writer and musician who’s work I really love and admire, so I trust his opinion from a lot of different angles. And most importantly I trusted him to tell me which bits were not working!

In 2014 you and Nuala Honan toured your show Folly around Australia and at the Adelaide Fringe, and it was a really big success! Do you have any advice for anyone wanting to take a similar leap?

We definitely groped our way through the dark when writing and producing that show. We didn’t have any idea about funding or touring strategies when we started – we just drank loads of Guinness and got on with writing it!

And a year later when I did apply for funding from the AIDF to take it to the Adelaide Fringe, I asked for loads of help and advice from fellow poets who had already done funding apps, because it all seemed so confusing and complicated. And so now I always help anyone who asks me for help with a funding application, because you gotta pay that kind of thing forward!

So I guess my advice is – ask loads of questions, don’t be scared to get advice from your peers, but also, DO just get on with writing the thing you want to make. That’s the most important part, writing the thing!

Finally, what’s next for you and your writing?

Well, the thing I was working on in Iceland is a new (and still quite unknown) idea for me. It’s kind of long piece, longer than a short story, but it’s in verse and broken into separate poems, and it is narrative. It follows a teenager in Morecambe whose sister has committed suicide, but I’m trying to explore familial relationships and relationships between women, and also celebrate non-nuclear families, and love. As you may be able to tell, I’m not entirely sure how to talk about it yet! Or indeed if it’s any good. But now I’ve got a first draft of it from my residency at Skriðuklaustur, I’m going to keep working on it and editing it and trying to figure it out!

I’m also right at the beginning of working on a new show with Nuala Honan (who I wrote and performed Folly with). It’s about the end of the world but I don’t want to say much more than that yet in case I jinx it! But it is a total joy and super exciting to be working with Nuala again, so watch this space.

Sally is launching her new collection this weekend in London and Bristol and will be doing a tour in the South including Glastonbury and Lamar Tree Festivals. Details for dates and venues here.