Only Air by Stephen Lightbown

“Only Air is a truly cinematic book, powerful, visual and essential.” – Joelle Taylor

We are delighted to announce the release of collection Only Air from Bristol-based poet Stephen Lightbown!

Stephen is a poet and disability rights champion. He was born in Blackburn, Lancashire. In 1996, aged 16, he experienced a life-changing accident whilst sledging in the snow and is now paralysed from below the waist. In 2016, twenty years after the accident, Stephen started writing poetry about his life as a wheelchair user. When not writing and performing poetry he spends his days working for the NHS. Stephen now lives in Bristol and has a long-held ambition to read his poems in his Northern accent in New York. Only Air is Stephen’s first full length poetry collection.

Only Air is a deeply personal collection of poems which explore what it is like to go through a life changing accident and then to re-exist in a world that is suddenly unfamiliar. It is a story of making sense of a new way of surviving and beliefs once held whilst trying to overcome barriers, prejudices and labels. Sometimes moving other times a wry humorous account of memories, this is part biographical with a healthy mix of reflection. This collection considers what it means to be part of a family, being alive when you don’t conform, and making your journey when the way you perceive yourself is often very different to the ways others observe you. At its very core, this is a discovery of what it means to be normal and to regrow. 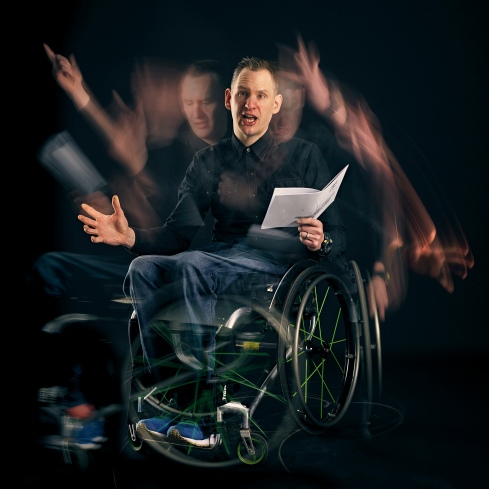 Stephen is embarking on a number of launches this spring, determined to take the conversation of accessibility forward for the future of live performance. See him 11th April at Spike Island in Bristo. Also performing are Donna Williams and Giles L. Turnbull. Get tickets and more info.

4th May see Stephen perform in London at the Poetry Cafe, the evening also features Abi Palmer, Katie Watson and Raymond Antrobus – hosted by David Turner.  Then at the Library Theatre in Darwen on 20th June, Stephen will be launching again with Jackie Hagan and Owen Lowry.